The Rotary Rose Parade Float Committee Inc. presents “Changing Lives Through Education” as the theme of our January 1, 2022, float.

The seven sustaining Districts each sponsor a walker for the Float. 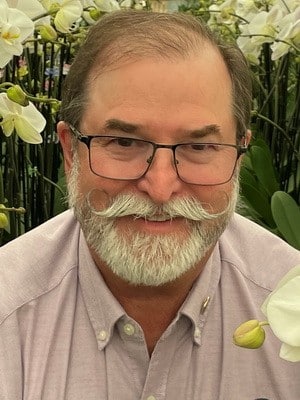 Chris Gubler has been involved with Rotary for over 25 years. He is a member of the Yucca Valley Sunset Rotary Club known in Rotary “as the little club that can”. Chris has served as club president five times and is a multiple Paul Harris Fellow. Chris says, “Rotary International affords the opportunity to help a broad spectrum of worthy causes, both locally and globally.” “It is a privilege to be a part of such a humanitarian organization.”

Growing up in Altadena, Chris is no stranger to the Rose Parade. The Gubler family donated orchids to the Cal Poly Rose Float in the 70’s and 80’s. Chris is the third-generation orchid grower and is currently the President of Gubler Orchids Inc. He is a graduate of Cal Poly Pomona with a degree in Ornamental Horticulture and with minors in Botany and Marketing. Chris is married to Debbie who he met at Rotary. Together they have two daughters. Jessica and Kelsey. Kelsey also a Rotarian, represents the fourth-generation orchid grower and was a member of the Rose Float committee at Cal Poly Pomona.

The Gubler family partners with the Yucca Valley Sunset Rotary to host the Morongo Basin Orchid festival held in the first week of October for the past 25 years, with all proceeds benefiting charities throughout the high desert communities. Chris and his team of Rotary volunteers developed a format that was inclusive to all charitable organizations to participate and benefit from the Annual Orchid Festival. A model that is now being used by other organizations. The Festival has grown considerably over the years, now generating over $28,000.00 per year for Desert charities. Funds are equitably distributed through the Yucca Valley Sunset Rotary Club.

Go to the History page to see past float riders and outwalkers.